We gathered together for our Brazilian Beltaine Celebration on a quiet morning during the first weekend of November. We drove to a city park in Curitiba and grabbed our gear and began our walk to the celebration area. I was told that this particular park was off the beaten path and that the area was fairly primitive. The walk through the park was very quiet and the striking beauty of the trees and the silence of the morning were a powerful counterbalance to the work that was to be done.

Upon arriving at the location, we were asked to gather whatever firewood we could find and to clean up any garbage that had been left by previous visitors. I thought this was an excellent idea to not only gather what was necessary, but to start our work by making the area better than it had been left to us.

The first thing that I noticed was the sound of a small, rushing stream. I walked over to the border of the area where we were setting up and there was this narrow but rapidly moving stream. It sounded so melodious and, with the absence of many urban sounds, it was the one thing that I heard at the edge of my consciousness. I walked over to it and watched in wonder as it made its way past us and onwards to a larger and perhaps wider purpose.

I was given a beautiful white tunic to wear and it really put me in the ritual mood. As we gathered brush and picked up stray things here and there, it felt as though I was quietly spiraling in towards the ritual mind set that we so often look for. We were joined by several more members of Fine na Dairbre until we had all of the members of the Protogrove, including Shaz Cairns, the Asia-Pacific Regional Druid, and myself. The surrounding natural are now cleaned, the efforts were now focused on clearing out the fire pit, which was the center of the ritual experience. Ample wood was gathered and stacked to last for the entire ritual and mention was made that everything that wasn’t used was to be returned to the Earth.

At the very beginning of the rite, we were instructed to go out into the ritual field and find a place to center ourselves and to commune with our spirit guides and animals. I had never heard this expressed in quite this way and it was an great experience for me. Ever since I had arrived in Brazil, I kept coming across ants, formida, at just about every place I looked in nature. When I was just about to close my eyes to center myself, I looked down, and I saw an ant sitting on me. It then struck me that the reason they had seemed so ubiquitous was that they were trying to give me a message – they were now one of my Spirit Animals. Then, as I closed my eyes and let my conscious self sink into the sounds of the location, I once again heard a very familiar and insistent sound – that of the nearby stream. I questioned myself: could a spirit guide be something other than an animal of some sort or an insect? Could it be the movement of something like water? Upon reflection, the answer was given to me: yes. I discovered, along with my ants friends, that moving water, such as in a stream, was also a spirit guide. Here, on the other side of the equator, I discovered a new spirit guide and one that had been with me for a very long time. I felt very fortunate and gave thanks to my totems and the spirits of the place.

The ritual began with an acknowledgement of the Outsiders. Two of the ritual participants went to their designated location for Outsider offerings and the made acknowledgements and left offerings for the Outsiders. Next, everyone was welcomed and the purpose of the ritual was discussed. It was really interesting to listen to the Portuguese parts of the ritual because Portuguese is a very melodic and lyrical language and the sounds seemed so very much in harmony with the surrounding that we were in. Next came the purification, and this was a real treat.

One of the features of the Fine na Dairbre ritual was the use of an amphora to a) call the spirit of the Earth Mother into; and b) to use later on for the sake of the omen (using an open system of divination). The amphora was filled with herbs, if I remember correctly, and with red wine. The Spirit of the Earth Mother was honoured and welcomed into this vessel and the amphora was placed onto the altar. 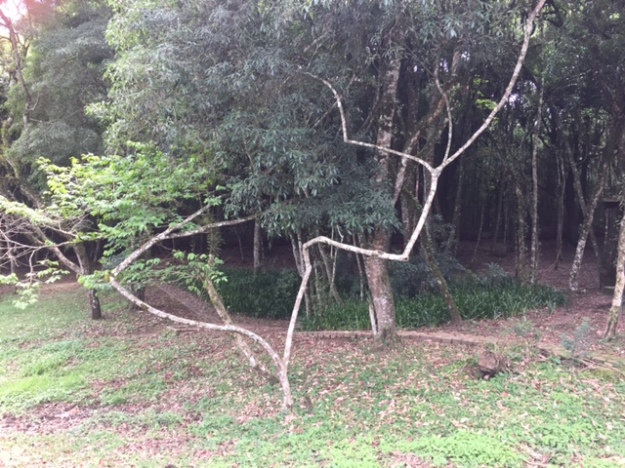 The deity of the occasion for Beltaine was An Dagda and his offering was a meat porridge which was deemed an appropriate gift for this deity. The pot of porridge was held aloft and the offering was made upon the ground. Once the Dagda was called into the rite, individual offerings were added by each person in attendance and  I have to admit that I enjoyed watching each and every individual make offerings and listening to their prayers in Portuguese. For me, it was if the individual words disappeared and the offerings that fell from each person’s lips were sweet songs that painted the rite in such resplendent colours that the area seemed to glow with music. During these offerings, I noticed that one of the Nature Spirits had come over and was enjoying the Dagda’s porridge that was set upon the ground and I looked at the other Nature Spirit and I noticed that she must have just had pups – they had previously made their own offerings to the Earth Mother and we were blessed, celebrants and Kindreds, communing together. After the Dagda’s feast was consumed, the two Nature Spirits lay on the grass and eventually went to sleep. In this way, these sacrifices had been accepted. 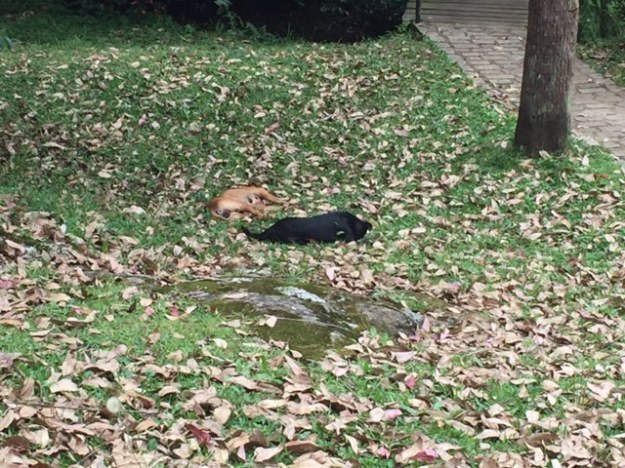 The Prayer of Sacrifice was offered and then it was time for the omen. This is where the amphora and an open system of reading was used. The amphora, filled with wine and the spirit of the Earth Mother, was put into the fire as an offering. There was perhaps 250ml of wine in the vessel and once the wine heated to sufficient temperature, the wine overflowed onto the outside of the white amphora. The omen was read by looking at what the wine did on the vessel itself. Someone commented that the on one side of the amphora, it looked like the head of a wolf, a large black wolf and, lo and behold, a large black dog came out of the forest and walked around the area in which the Outsider offering had been placed. The person reading the omen decided that this was indeed a good omen and that the offerings had been accepted. A little while later, someone called to my attention that there were two ogham on the inside of the amphora and indeed there were. These two ogham are Ohn and Ur. In any event, I found these ogham to be benevolent signs and also concurred, albeit later, that the offerings had been accepted and that direction had been given by the Kindreds and An Dagda. We then feasted, with our canine Nature Spirits sharing a part of the feast, and we unwound the ritual as usual. All offerings not used were either poured upon the ground or offered to the fire so that nothing would remain. We would leave the area as we had found it, less some wood that we had gathered for the fire.

As we packed up and left, we walked the distance back to the gate, accompanied by our canine friends. They walked with us to the metal gate which served as the way in and the way out, and stayed behind as we walked back into the mundane world of the parking lot. I looked back to take in the beauty of the park again, and to say goodbye to our canine companions. I would be leaving Brazil the next day, and I was sad to leave this behind.

I apologise for the long delay between Beltaine and this writing, but I have played the events of that trip, of that journey, of that day, over and over in my head and it remains a pivotal and important journey, not just because of the miles traveled or the people met and remembered and the beauty seen and experienced. It gave me a chance to see a different way of worshiping and the knowledge that I had found some other totem beings to help in my travels. I came away from Brazil with longing for rejoinder with that place and with those people, but I also felt that my understanding of the Earth Mother and especially the non-linear nature of Her way was to become much more important in how I looked at my Druidry and the world on both side of the Equator. More about that soon to come.